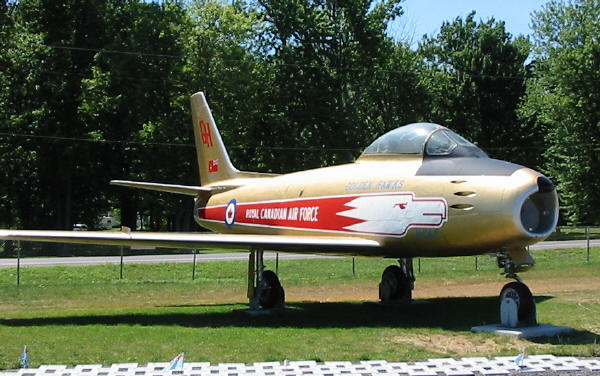 The North American F-86 Sabre was first flown on 01 October 1947 and the aircraft quickly proved to be a highly successful design. In 1949, with the formation of NATO the Canadian government made the decision to re-equip the RCAF’s front-line fighter squadrons with modern aircraft and the F-86 Sabre was type selected.
Consequently, an agreement was reached between North American and Canadair Limited of Montreal to manufacture 100 F-86As in Canada.
After the first prototype, designated CL-13 Sabre Mk I, Canadair immediately began production in earnest with an improved Mk II model. The Mark II was essentially an F-86E with an "all flying " tailplane to provide better flying characteristics as well as a flat windscreen. The next major production model was the Mark IV which originally was to have been powered by an Orenda designed engine but to retain commonality with the F-86E, it  carried the J47-GE-13. Various design improvements were incorporated throughout the aircraft. 438 Mk IV Sabres rolled off the assembly lines. The Mark V Sabre was the first production model with a Canadian engine utilizing the Orenda 10 version rated at 6,355 lbs thrust. The bigger Orenda engine necessitated a larger diameter opening in fuselage frames and stronger engine mounts.
An important structural modification was the introduction of a fixed leading edge to replace the automatic slats on earlier versions. This change was designed to enhance the high altitude performance of the aircraft. Small wing fences were also introduced at the 70% span position. These modifications were successful but also resulted in a corresponding decrease in low speed handling characteristics.
After the construction of 370 Mk V aircraft, Canadair moved on to the final (and best) version, the Mark VI. This version carried the two stage Orenda 14 engine with a 7,275 lb thrust rating. The wing leading slats were re-introduced while retaining portions of the Mk V wing configuration. The Mk VI therefore acquired superb combat manoeuvring. With this combination of engine and aerodynamics, the Mark VI was widely regarded as the best "dog-fighter" of its era. The RCAF’s Golden Hawks team flew Mk V aircraft initially but were soon equipped with the excellent Mk VI aircraft.