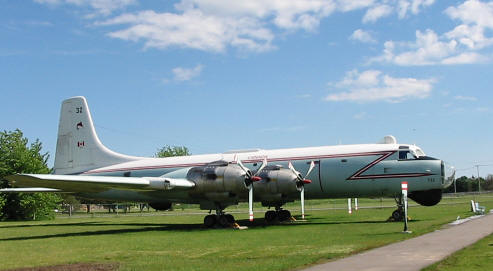 Argus 732 on display at the RCAF Memorial Museum.

The Canadian-built, Canadair Argus was a unique hybrid that employed the wings, tail surfaces and undercarriage of the British designed Britannia transport, married to a completely new un-pressurized fuselage of Canadian design and equipped with different American-designed engines.
One of the most effective anti-submarine warfare aircraft of its day, the Argus was a mainstay for the RCAF in the maritime role. The principal difference between the Mark I and Mark II was primarily in the different navigation, communication and tactical electronic equipment fitted internally. Externally, the Mk II exhibited a redesigned smaller nose radome and additional ECM antennae above the fuselage.
The Argus replaced the Lancaster and Neptune aircraft types previously flown in the maritime roles and eventually, the Argus was itself to be replaced by the current CP-140 Aurora aircraft.