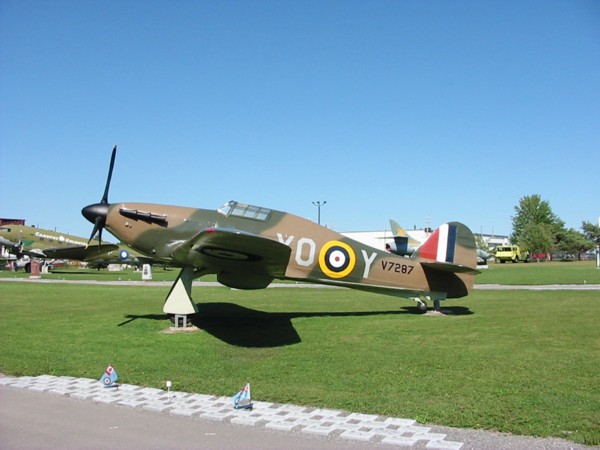 In the summer of 2004, the RCAF Memorial Museum unveiled a full scale model Hawker Hurricane as the second half of a Spitfire/Hurricane pair. Both aircraft were subsequently placed in the same area as the Fighter Pilots Association Memorial forming a basis upon which a Battle of Britain commemorative area can be built around.

The design of the Hurricane used a lot of wood and fabric for the wings and fuselage, with the engine and cockpit area being aluminum-covered steel tubing. The Hurricane I was powered by a 990hp Rolls-Royce Merlin engine, had a speed of 330 mph at 17500 feet, and a service ceiling of 36000 feet. It entered service with 111 Squadron at Northolt in December 1937. A tough and reliable aircraft, Hurricanes were allotted the task of attacking German bombers in the Battle of Britain and shot down eighty percent of all aircraft claimed by the Royal Air Force during the Battle. Throughout the Second World War, the aircraft performed in various roles as an interceptor, fighter-bomber, night fighter and ground attack aircraft. The armament varied accordingly.