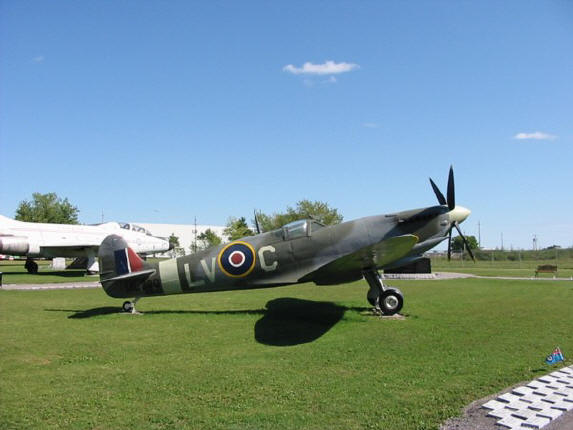 On Tuesday 13 June 1944, a week after the D-Day landings, two Spitfire aircraft collided in the Normandy skies. Wing Commander Lloyd Vernon Chadburn DSO and Bar, DFC, aged 25, Commanding Officer of 127 (RCAF) Wing, was dragged from the wreckage of one and died a few hours later. Thus the RCAF lost one of its most decorated fighter pilots and an exceptional leader.

In the summer of 2003, the RCAF Memorial Museum unveiled a full scale model Spitfire representing the personal aircraft flown by W/C Chadburn, as one half of a Spitfire/Hurricane pair donated by the Fighter Pilots Association and George Weston Limited, to commemorate Garfield Weston’s wartime purchase of Spitfires for the Royal Air Force. In 2004 both aircraft were placed in the same area as the Fighter Pilots Association Memorial forming a basis upon which a Battle of Britain commemorative area can be built around.

The first  Mk I Spitfire entered service with 19 Sqn Royal Air Force at Duxford in 1938. By the time the Second World War began 10 Squadrons  were operational.

By 1948 twenty two different variations had been built for a total of  22,500 aircraft which performed a variety of roles.