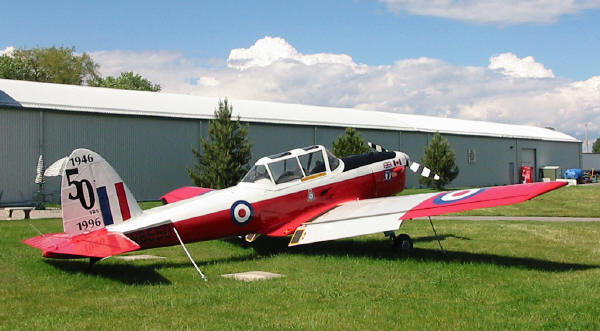 In October 1945 the De Havilland Canada design teamed were given the task of developing a  replacement for the well-known Tiger Moth. Planning begin immediately and a distinctive Canadian name - the Chipmunk - was adopted. The first flight of the prototype CF-D10-X took place only 7 months later on 22 May 1946. The prototype was then shipped to England as G-AKEY and, subsequently, 1000 Chipmunks were eventually built. The RAF adopted it as a trainer for the Primary Reserve, and in Canada it was used in the ab-initio pilot training role.  The RCAF Memorial Museum's Chipmunk bears the RAF Roundel and commemorates the 50th Anniversary of the aircraft.