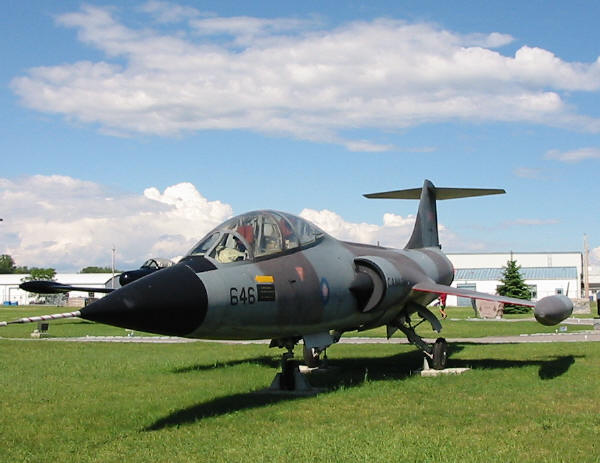 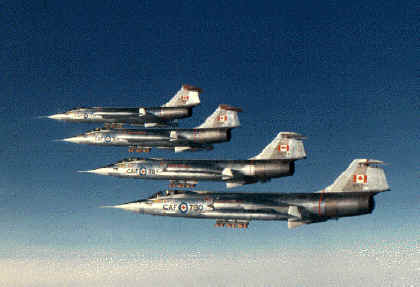 CF-104 Starfighters from 6 Strike/Reconnaissance OTU Cold Lake enroute to the bombing range in 1963. Note the Mark 106 practice bombs used to simulate the delivery of a  nuclear weapon.

Late in 1959, Canadair was selected to produce 200 strike, reconnaissance versions of The Lockheed designed F-104 Starfighter, designated as the CF-104, to replace the F-86 Sabres being flown by the RCAF in NATO. The CF104D was a two-seater used for pilot training.The aircraft was known by a wide variety of nicknames some flattering and some not so flattering (i.e. the "missile with a man in it" referred to the design, while "flying lawn dart and widow-maker" referred to the high number of crashes the type suffered in the early years).

The CF-104s had  a number of specialized equipment and changes for the Canadian role. The aircraft was capable of the nuclear strike role and reconnaissance packs could be carried in a special pod under the fuselage. Originally, the standard M-61 gun pod was replaced by a 120 US gallon (455 litre) fuel tank. Later in its CF career, the aircraft was returned to a conventional strike role and the 20mm cannon was re-installed. The CF-104 was replaced in service by the CF-18 Hornet.