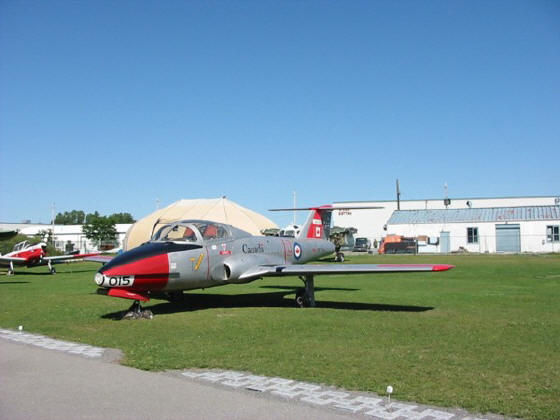 CT-114 aircraft:  circa 1968-69, in a white paint scheme given to ex-Centennaire aerobatic team aircraft.  (CF Photo)

The CT-114 Tutor aircraft was designed and manufactured by Canadair Limited (now Canadair, Bombardier Inc.) to an RCAF specification. In anticipation of a requirement by the RCAF for a basic jet trainer, Canadair began preliminary in-house studies in 1955. By 1957, Canadair had constructed a full scale mock-up of the aircraft incorporating side by side seating and a single engine. After an evaluation by the RCAF, the CL-41 was selected as the RCAF's basic jet trainer and was ordered into production in September 1961 as the CT-114 Tutor.
The Tutor is a conventional all metal, low wing, single engine turbo-jet aircraft designed for the training of student pilots. It features side-by-side ejection seats for a crew of two in a pressurised and air conditioned cockpit. The majority of the services are electrically operated, but the landing gear, wing flaps, speed brakes, nose wheel steering and wheel brakes are hydraulically operated. The aircraft is certified for Instrument Flight Rule (IFR) conditions and is equipped with all necessary instrumentation for navigation, instrument and night flying training.
Canadair supplied 190 CT-114 aircraft to the Royal Canadian Air Force in the 1963-67 timeframe. Various changes were immediately made to the CL-41A prototype configuration. The most significant modification was the government directed use of the General Electric J-85 CAN 40 jet engine produced under licence by Orenda Ltd (now the Orenda Aerospace Corporation, a Magellan Aerospace Company ) in Toronto. This engine is an axial flow turbojet developing approximately 2,700 pounds maximum continuous static thrust at sea level under standard atmospheric conditions.

The Air Park is being expanded and more aircraft are being added. Please visit the site again!