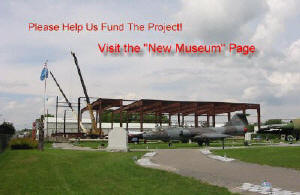 A challenge to all!

This page provides a summary of the Museum's operation and the expansion project, a discussion of "Planned Giving" and acknowledgements to Donors.

Canada's Air Force has a long and proud history.  The men and women who have served therein committed themselves to preserve and protect our country and the freedom it represents.  Many gave their lives in the performance of their duties.  Since the First World War, of the more than 300,000 men and women who were members of the Air Force, over 40,000 lost their lives in service to their country.

To help preserve our heritage and recognize the many Canadians who served and continue to serve in Canada’s Air Force, the RCAF Memorial Museum, located in Quinte West (Trenton) Ontario, was established in 1984, and was subsequently designated as the national Air Force museum. It is especially dedicated to the memory of those airmen and airwomen who gave their lives in both peace and war.

Unlike traditional Air Force museums, which recognize the actions of specific units and their activities, the RCAF Memorial Museum presents a comprehensive overview of all Air Force contributions. It is primarily a social history museum, with the focus being on the people who served, rather than on the technology that helped them to do their job. The adjacent Air Park is home to 16 aircraft, a large number of memorial cairns, and more than 6,000 “Ad Astra” stones bearing the names of Canadian airmen and airwomen, past and present, and their spouses.

The museum is completely self-sufficient in its operations. It is governed by a volunteer Board of Directors, comprised of present and former members of the Air Force, members of local governments, and other prominent members of the local community. Although associated with the Department of National Defence, the Museum is a non-public funded operation and a registered charity that must raise funds for its daily activities and special projects.

Open to the general public 12 months of the year, at no charge, the museum has attracted over 500,000 visitors, making it the largest year-round tourist attraction in the Quinte area. Approximately 75% of the visitors are from elsewhere and include many tour groups, classes of school children, veteran’s organizations and their families, and a wide variety of aviation enthusiasts from all over Canada and many other parts of the world. Approximately 90 volunteers from the local community undertake the majority of the Museum’s daily operations, acting as tour directors, working in the gift shop and looking after the memorial cairns and Ad Astra stones.

The New Expansion Project
By the late 1990s, despite one expansion project which had been completed, it was becoming very evident that the museum could no longer adequately store and display the rapidly growing number of heritage items which were being donated and accessed, without a significant expansion to the facility. Accordingly, a major fundraising program commenced with a goal of approximately five million dollars, to increase the size of the museum and provide approximately 73,000 square feet of display area.

One of the major reasons for the large increase in the space required is for the WWII Mark VII Halifax bomber NA 337, currently being restored by Museum volunteers. Indoor housing of the newly restored Halifax  extension  will prevent deterioration of a priceless artefact, and will also make it accessible to visitors throughout the year. It is only one of three Halifaxes to have survived the war, and the only one to exist in North America. The restored bomber will be a fitting tribute to the 50,000 RCAF personnel who served in Bomber Command, 10,000 of whom gave their lives.

The Museum addition will also allow for expansion of the existing displays and inclusion of more interactive modules. A detailed implementation plan is being worked upon in conjunction with a professional design consultant. The Framework for Display, which forms part of the Constitution and Bylaws of the museum, and guides all displays therein, reflects the mission to preserve and interpret the Air Force heritage. It spans the time frame from the birth of flight in Canada through to the present day and is prioritized to place the greatest emphasis on the periods where the Air Force has been most involved.

The project consists of Phase 1 (the interior shell), and Phase 2 (completion of the interior display area). There is also a separate project -Phase 3, which includes the renovation and reconstruction of the existing museum area into an Administration area, a new gift shop and renovated storage areas. Phase 3 will cost approximately $750,000 to complete and will be initiated if and when sufficient funding becomes available after Phase 2.

In 2002, the Museum successfully applied for a SuperBuild grant from the Province of Ontario, and $766,000 was approved, but Federal funding is still awaited. Many other donors have all made significant contributions. $2.1 million of the project total ($4.8 million) has been raised to date. The Museum believes that it will raise the balance of the capital funding required as the construction phase continues over the next two years.  An additional two million long-term loan has been made available from the Canadian Forces Personnel Support Agency, to assist during the construction phase.

In addition to obtaining significant Federal funding, our immediate goal is to raise another $800,000 as soon as possible to start covering the costs of the loan. Please join the many supporters of the RCAF Memorial Museum by making a corporate or personal contribution; which, since the museum is a registered charitable organization, will be income-tax deductible. Sections of the new building can be named to identify significant contributors.

The challenges, which Canada's Air Force has faced over the years, have been truly formidable, but there was never any shortage of men and women willing to take on the jobs that were given to them and to get them done - even to the point of paying the supreme sacrifice.

In an isolated cemetery in the Far East where over 1500 Allied soldiers lie buried; the simple inscription on the memorial reads: "When you go home, tell them of us and say - for your tomorrow we gave our today."

George Santayana, one of the worlds leading philosophers, once wrote: "Those who forget the past are condemned to repeat it".

In these two quotations is found the reason why supporting the RCAF Memorial Museum is so important - to tell the story of all of those in Canada's Air Forces who gave their lives so that we may enjoy ours; and, to ensure that one of the most important parts of our past will never be forgotten.

In the RCAF Memorial Museum the long and proud history of Canada's Air Forces is preserved and publicized. The Museum displays aircraft, artefacts and equipment but, most importantly, tells of the wonderful contributions made by our men and women in military aviation.

When making a gift to the RCAF Memorial Museum, many of our friends of the Museum must take into account their financial considerations of the future. Perhaps there is a concern of potential long-term illness, inflation, investment income depletion, or needs of other family members. Consequently, any significant gift to the Museum is considered a dream or wishful thinking.

However, there are many ways in which gifts can be deferred by arranging a gift to the RCAF Memorial Museum, while still maintaining present and future security. A significant gift can be a reality.

In my case, I was born three weeks after my mother's brother, Howard, died serving in the RCAF in the Second World War. My grandparents emigrated from Denmark - pioneered in Saskatchewan and gave a son to their country for future generations such as myself. I was always aware of that sacrifice and now as a parent cannot imagine the terrible heartache of my grandparents. Yes, myself and numerous others understand Air Commodore Birchall’s words, "Thoughtful donors can assist the Museum in its endeavour to honour fellow Canadians who have given their tomorrows so that we may have our todays."

It really is not that difficult to arrange a gift to the Museum -  and as a start in our gift planning program, we have emphasized three specific areas - Estate Gifts by Will; A gift through Life Insurance; and, Gifts of publicly-listed securities.

Gifts By Will
There are numerous ways in which a bequest can be made utilizing Will clauses. We have prepared suggested clauses as a way of an example only which can be amended to suit particular applications. A bequest in your Will to the RCAF Memorial Museum would provide tax relief for your Estate in the year of your death.

A Gift Through Life Insurance
A gift of life insurance presents donors with an opportunity to make a significant gift to the future of the RCAF Memorial Museum, while also enjoying beneficial tax savings.

A gift of life insurance will extend your personal influence beyond your lifetime. Life insurance may be structured so that payments are modest and tax deductible. Some life insurance held by friends of the Museum provides for an immediate gift.


Appreciated stocks and bonds, next to cash, have become a most popular gift method made to the           RCAF  Memorial Museum. Donating a gift of securities is both simple and tax effective.

When you make an outright gift of appreciated securities, you will receive an official donation receipt for the fair market value of the gift The October 18, 2000 mini budget has reduced the capital gain inclusion rate to 25% (one-half of a traditional capital gain). This combination of donation at the fair market of publicly-listed securities and one-half of traditional capital gain inclusion can be in many cases very tax efficient

All discussions will be in strictest confidence.

A donor recognition policy is in place to honour those individuals, corporations, service clubs, community organizations and philanthropic foundations who make monetary and/or gift in kind donations to the Museum through the RCAF Memorial Museum Building Fund.
For major donations  to the fund-raising program for the new museum an opportunity will be given to have specific parts of the museum named in honour of the donor.
No amount, however,  is too small, and Donors at all levels will have their names displayed in a large volume situated in the Museum.
All recognition is cumulative over the lifetime of the donor into the categories described below.

Donors at the level of Friend and above will be recognized at the respective level on the Donor’s Wall with the display of an aircraft replica bearing the Donors name. The Wall is constructed in such a way that donor’s names are removed from one category and placed in a higher category as their contributions accumulate and they reach the next higher level.

The RCAF Museum is a Non -Public Funded Institution, established and administered in accordance with Sections 38 to 41 of the National Defence Act. It is recognized by Revenue Canada as a charitable organization as well as an Agent of the Crown.
Cash donations made to the Museum qualify for a non-refundable federal tax credit of 17% on the first $200 of the total amount of all gifts made in a year and a non-refundable federal tax credit of 29% on the balance of your annual donations exceeding $200.
Depending on your province of residence, you may be eligible for tax saving of up to 54.2%. If you have any questions concerning donations please click on this link: mailto:Executive Director

f you are a Canadian airman or airwoman who has served, or is serving, in one of Canada’s Air Forces or an Allied Air Force, or are the spouse of one, there is another option for donations open to you:  the "Ad Astra"  Memorial Stone program.