For the past 13 years the RCAF Memorial Museum has been conducting  interviews with former RCAF personnel. This has resulted in a collection containing over 500 hours of videotapes. The recollections of participants provides a unique and valuable oral history of some of the many events 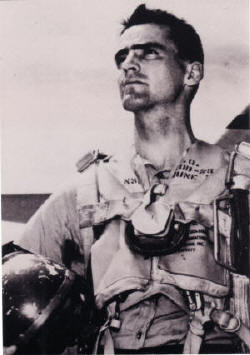 which combine to form the heritage of the RCAF. While these oral histories are not intended to replace or supercede any other forms of historical research, they do provide insights not always available in traditional documentary evidence such as government archives, newspapers, books, articles and photographs.

Selected segments of the collection are being shown on the local cable company on a regular and continuing basis. These have been well received by the large retired military population residing in the Quinte area. It is intended that portions of interviews be integrated into the displays of the expanded Museum, and that these "voices from the past", will enhance both permanent and temporary exhibits. The entire archive is being transferred to DVD which has a guaranteed shelf life of 30 years at the present time.

The photo at right is of F/L Ernie Glover who flew Hurricanes and Typhoons in WW 2, was shot down in May 1943 and spent the rest of the war as a POW in Stalag Luft 3. He reinlisted in Nov. 1948, flew Vampires, F86 Sabres and  then went to Korea on exchange with the USAF 334 Fighter Squadron. He flew 58 missions, had 3 confirmed MIGs destroyed and 3 probables. For his accomplishments, he  was awarded the Distinguished Flying Cross by both the RCAF and the USAF.

The collection contains a number of unique and valuable interviews including four interviews with officers who served in WWI as members of the Royal Flying Corps - three also served as AVMs in the RCAF in WWII, and the fourth was instrumental in setting up the original concept of Ferry Command.  Also, the surviving members of the crew of the Mynarski Lancaster relate their experiences as they occurred over France in July 1944.

Two RCAF members assigned to RAF Bomber Command relate their experiences -  one as a pilot and the other as a navigator on the attack on the German battleship Tirpitz it lay in a heavily defended Norwegian fjord in March 1942. A description of the tunnel in Stalag Luft 3 , from the Canadian who was in charge of the digging operations adds additional insights to the story referred to as "the Great Escape". Night fighter operations in the UK, North Africa, and Malta, as described by W/C Carl "Moose" Fumerton, DSO, DFC & Bar draw attention to this unique form of combat.

While the above relates to personal acts of courage and bravery, numerous interviews have also been gathered from those who served in training capacities in the BCATP. The important contribution of these people is only now being fully recognized. During the 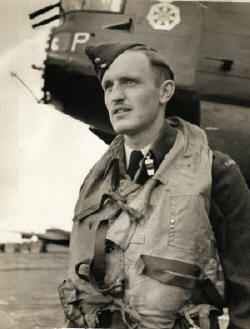 early stages of WWII many Canadian graduates of the BCATP were dispatched to serve with other Commonwealth units in all of the various theatres of operations. Canadians served with RAF units in North Africa, Sicily and the Far East.

As stated in Vol. III of the Official History of the RCAF, "a substantial majority of the  93,844 RCAF personnel who served overseas between 1940 and 1945, did not serve in Canadian squadrons". Consequently their stories are not included in the Official History. The video tape collection at the RCAF Memorial Museum addresses this imbalance.

For a look at some of the many interesting people and their stories, you are invited to preview the "catalogue" by following the links at the end of this page.

W/C A. Chester Hull is shown above in front of a #428Lanc in 1944. At the time he was CO of the Squadron. Following the war heremained in the RCAF and retired as LGen. A. C. Hull, CMM, DFC, CD. His final posting was as Vice Chief of Defence for the Canadian Forces. In a series of interviews he recalls his wartime experiences; his tenure in the Air Div as CO Zweibrucken in the early 50s and various staff appointments. 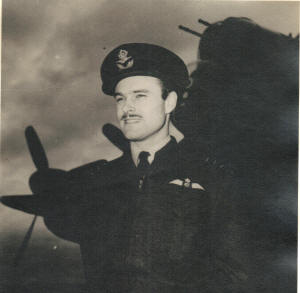 W/C R.W. "Bob" Norris, DFC, piloted Hurricanes during the Battle of Britain, Lancaster bombers over Germany, and North Stars in Korea. Trained on Lysanders and intended for Army Co-operation work, the pilots of #1 RCAF Squadron were given a 9 day conversion course on Hurricanes in the summer of 1940 and participated in the 114 day Battle of Britain. He retired from the RCAF in 1963.