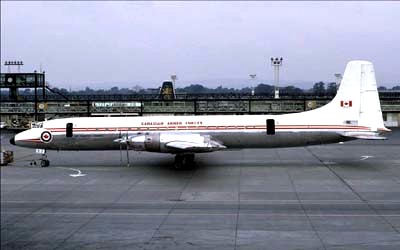 This aircraft was built by Canadair Aircraft Co. in Montreal Quebec Canada and delivered to the Royal Canadian Air Force (RCAF) on the 30th of March 1962.  It is officially designated as a CL-44-6, but because it was a military aircraft was designated as a CC-106 "Yukon"  with a tail number of 932. Thus is it commonly referred to in Canada as a Yukon. It was one of 12 aircraft build specifically for the RCAF. All twelve were declared surplus in 1971 and replaced by Boeing 707s. These twelve aircraft were sold around the world to various airline companies. 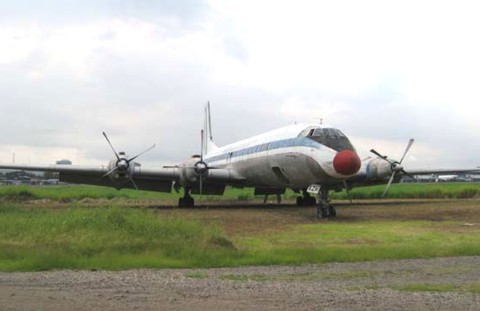 On the 1st of May 1974, Andes Airlines of Ecuador bought the aircraft and registered it as "HC-AZH". The aircraft was converted to a freighter and then, when Andes Airlines went out of business, it flew to Guayaquil in 1985 and has been located there for the last 20 years.

There are three  reasons why this particular aircraft is so important to  Canada and the Canadian Air Force. First, it is the last of the twelve aircraft to survive. All of the others have either been lost in accidents or have been scrapped and melted down. Second, it is the largest aircraft ever produced in Canada. Finally and probably the most important reason for the Canadian Air Force, is that this particular aircraft flew here in Canada and around the world as Canada's State aircraft. It was "Air Force One". Thus it has carried our Prime Minister and many dignitaries including the Pope, the Queen of England and many members of the Royal family. We have copies of its log books which describe the many missions it flew while it was a part of our Air Force history. 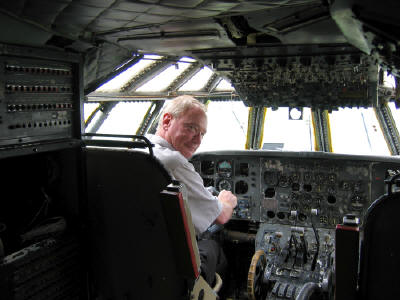 However, as a result of the Museum being unable to acquire sufficient funding to support the logistical requirement to move the aircraft by ship from Guayaquil Ecuador back to Trenton, that we have decided to donate the aircraft to the City of Guayaquil Aviation Museum. In this way the aircraft will be preserved and not broken up for scrap.

This was the only option available to the Museum when we were advised on very short notice "to move the aircraft off the airport ramp or it would be removed by other means" in June. We certainly wish to thank all of those individuals who have sent us financial support to save this magnificent aircraft. We will be attempting to contact all donors to determine which Museum project that they would prefer to have their donation applied to. !