On March 24, 1944 seventy-six Allied airmen escaped from the prisoner of war camp Stalag Luft III, Sagan, Germany through a hand dug 340 foot long tunnel, situated 30 feet underground, and connecting their hut to a spot beyond the perimeter fence. Their escape was immortalized in the 1963 movie "The Great Escape" which starred Steve McQueen and Richard Attenborough.

Only three of the escapees succeeded in reaching Britain, the rest were recaptured. To deter further escape attempts, and in direct contravention of the Geneva Convention, Adolph Hitler ordered 50 of the participants to be executed. To cover up the evidence, they were  then taken out in small groups at different times, and to different locations in the woods, where they were shot. The rest were returned to various prisons and concentration camps.

The RCAF Memorial Museum houses a full-scale mock-up of the Great Escape, designed by Wally Floody, which is cut open at the side and shows the section directly beneath the hut and part of the tunnel complete with the air-system and small rail car. At a recent ceremony at the museum, a very special painting of the Great Escape was dedicated. One of the original prisoners, Canadian veteran Donald Elliott shot down during a bombing mission in July 1941, was in attendance. 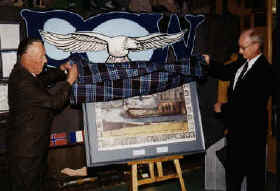 Former POW Donald  Elliott, at left, helps unveil the print at the RCAF Memorial Museum. It was donated by Myron Williams and Dennis Langford (right), whose uncle, Flight Lieutenant Patrick Langford who was stationed briefly at Trenton, was shot down on July 28, 1942, imprisoned at Stalag Luft III, participated in the Great Escape, and was one of the six Canadian airmen to be executed.

The ceremony was organized by museum volunteer Tom Stephens. The painting, "Stalag Luft III Tunnel Martyrs" by artist Bill Holder, shows the sequence of events of the escape, depicts the monument constructed to honour them, and shows the photographs of the martyrs. It was commissioned by Myron Williams, president of the RCAF Prisoners of War Association, who tasked Bill Holder to find as many of the 50 prisoners families as possible, and give them a print. So far 32 families have been found. 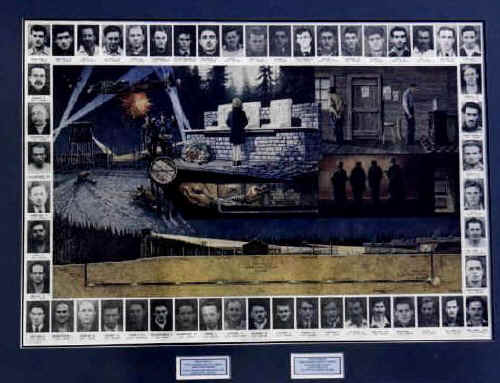