The Foundation was established in 2001 as a registered charity with the mission of raising funds to support the operations of the RCAF Memorial Museum. Since then, The Foundation has grown steadily and now has the ongoing support of almost 900 active members across Canada and some from outside of the country. In addition, many others make donations throughout the year, each contributing in their own way to the success of the endeavour. The Foundation itself sponsors two major fundraisers each year, these being the annual charity dinner and the annual charity golf tournament. In accordance with the applicable rules and laws, the majority of the funds raised each year are passed on to The Museum in quarterly instalments. The balance is retained by The Foundation and invested for the future.

The Foundation is managed by a Board of Trustees comprised of 12 selected volunteers from the 8 Wing and quinte area. The majority are retired, former members of the RCAF/CF and the remainder are local businessmen and women who have freely offered their time, experience and expertise in various fields. There are an additional three, non-voting board members. Two represent the RCAF Memorial Museum and 8 Wing respectively and the third is the Administrative secretary. The 12 voting members elect the Chairman from amongst themselves. The Board of Trustees meets monthly.

The Charity Dinner has proven to be most popular and is one of the major social events of the year in the Quinte region. It is now considered to be an annual affair. To date, every dinner has been a complete sell-out.

Planned as a formal event, the Charity dinner features a multi-course gourmet meal prepared by the best caterers available in the area and is enhanced by accompanying, high quality, Canadian VQA wines, premium liqueurs and a traditional port. Also featured is live, background music during the meal and a prestigious guest speaker. A social hour before dinner allows guests  to meet and greet friends old and new. Later in the evening, another period is set aside for more of the same as well as a little dancing before the night comes to an end.

While this is a formal affair, it is less structured and more relaxed than a traditional military mess dinner. It is intended to be a very special night out for all, especially the ladies who particularly enjoy the extra little niceties provided to make this a most memorable occasion.

Presently, the Charity Dinner is held at the 8 Wing Trenton Officers’ Mess, midweek, near the end of April each year.

The Foundation Charity Golf Tournament is an annual event that has drawn golfers from great distances. Played at the 8 Wing Trenton Golf Course, it too has proven to be enormously popular and is supported not only by the players but by numerous local sponsors as well. Quinte area businesses consistently provide assistance in the form of goods, services and cash to demonstrate their interest and to help ensure complete success.

In addition to a challenging game, the tournament  provides the opportunity to renew old acquaintances, meet new friends and win valuable prizes. The event is topped off by a steak barbeque with all of the “fixin’s” and an awards ceremony.

Again, the venue for this event is the 8 Wing Golf Course. It is also a consistent sell-out and is held in late July each year.

Recently, the Foundation was contacted by several individuals regarding the possibility of contributing financial instruments other than cash. For example, stocks, bonds and mutual funds. This particular type of donation now receives very special tax considerations and has new benefits for the donor. A financial advisor can best provide the essential information to anyone considering this approach. To facilitate such contributions, the Foundation has set up a brokerage account and has already received no fewer than four donations of such instruments.

Finally, some supporters choose to remember the Foundation by way of bequests in their wills. Once again, such gifts could be of some tax benefit to the estate and should be discussed with the person or agency responsible for the preparation of a will or a codicil to a will. 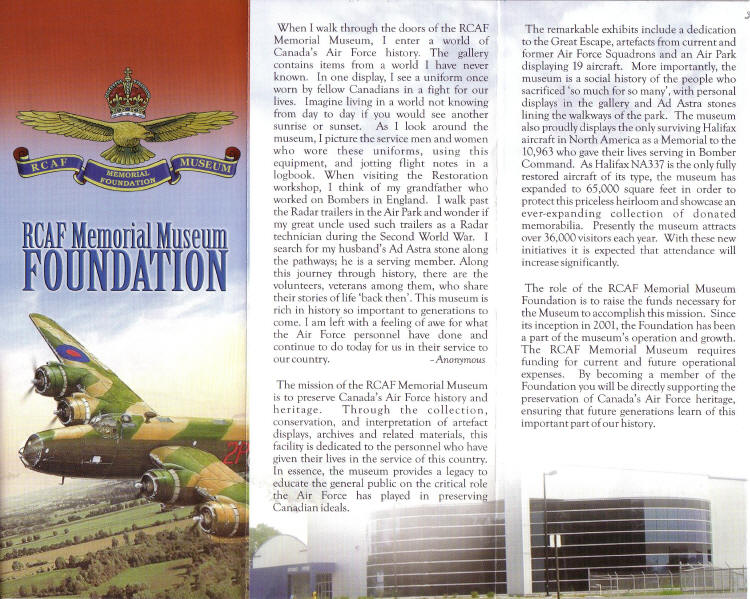